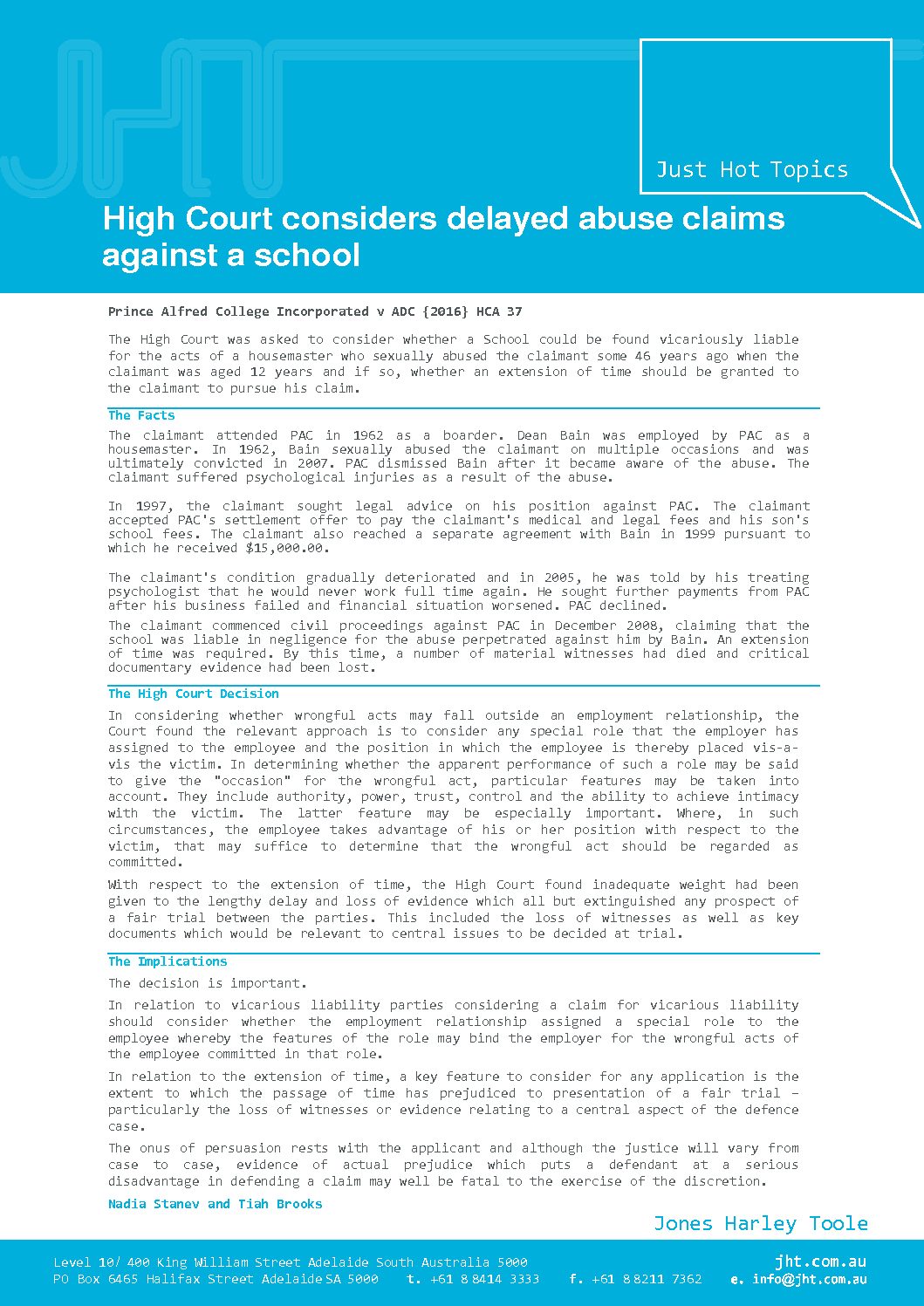 The High Court was asked to consider whether a School could be found vicariously liable for the acts of a housemaster who sexually abused the claimant some 46 years ago when the claimant was aged 12 years and if so, whether an extension of time should be granted to the claimant to pursue his claim.

The claimant attended PAC in 1962 as a boarder. Dean Bain was employed by PAC as a housemaster. In 1962, Bain sexually abused the claimant on multiple occasions and was ultimately convicted in 2007. PAC dismissed Bain after it became aware of the abuse. The claimant suffered psychological injuries as a result of the abuse.

In 1997, the claimant sought legal advice on his position against PAC. The claimant accepted PAC's settlement offer to pay the claimant's medical and legal fees and his son's school fees. The claimant also reached a separate agreement with Bain in 1999 pursuant to which he received $15,000.00.

The claimant's condition gradually deteriorated and in 2005, he was told by his treating psychologist that he would never work full time again. He sought further payments from PAC after his business failed and financial situation worsened. PAC declined.

The claimant commenced civil proceedings against PAC in December 2008, claiming that the school was liable in negligence for the abuse perpetrated against him by Bain. An extension of time was required. By this time, a number of material witnesses had died and critical documentary evidence had been lost.

In considering whether wrongful acts may fall outside an employment relationship, the Court found the relevant approach is to consider any special role that the employer has assigned to the employee and the position in which the employee is thereby placed vis-avis the victim. In determining whether the apparent performance of such a role may be said to give the "occasion" for the wrongful act, particular features may be taken into account. They include authority, power, trust, control and the ability to achieve intimacy with the victim. The latter feature may be especially important. Where, in such circumstances, the employee takes advantage of his or her position with respect to the victim, that may suffice to determine that the wrongful act should be regarded as committed.

With respect to the extension of time, the High Court found inadequate weight had been given to the lengthy delay and loss of evidence which all but extinguished any prospect of a fair trial between the parties. This included the loss of witnesses as well as key documents which would be relevant to central issues to be decided at trial.

The decision is important.

In relation to the extension of time, a key feature to consider for any application is the extent to which the passage of time has prejudiced to presentation of a fair trial – particularly the loss of witnesses or evidence relating to a central aspect of the defence case.

The onus of persuasion rests with the applicant and although the justice will vary from case to case, evidence of actual prejudice which puts a defendant at a serious disadvantage in defending a claim may well be fatal to the exercise of the discretion.