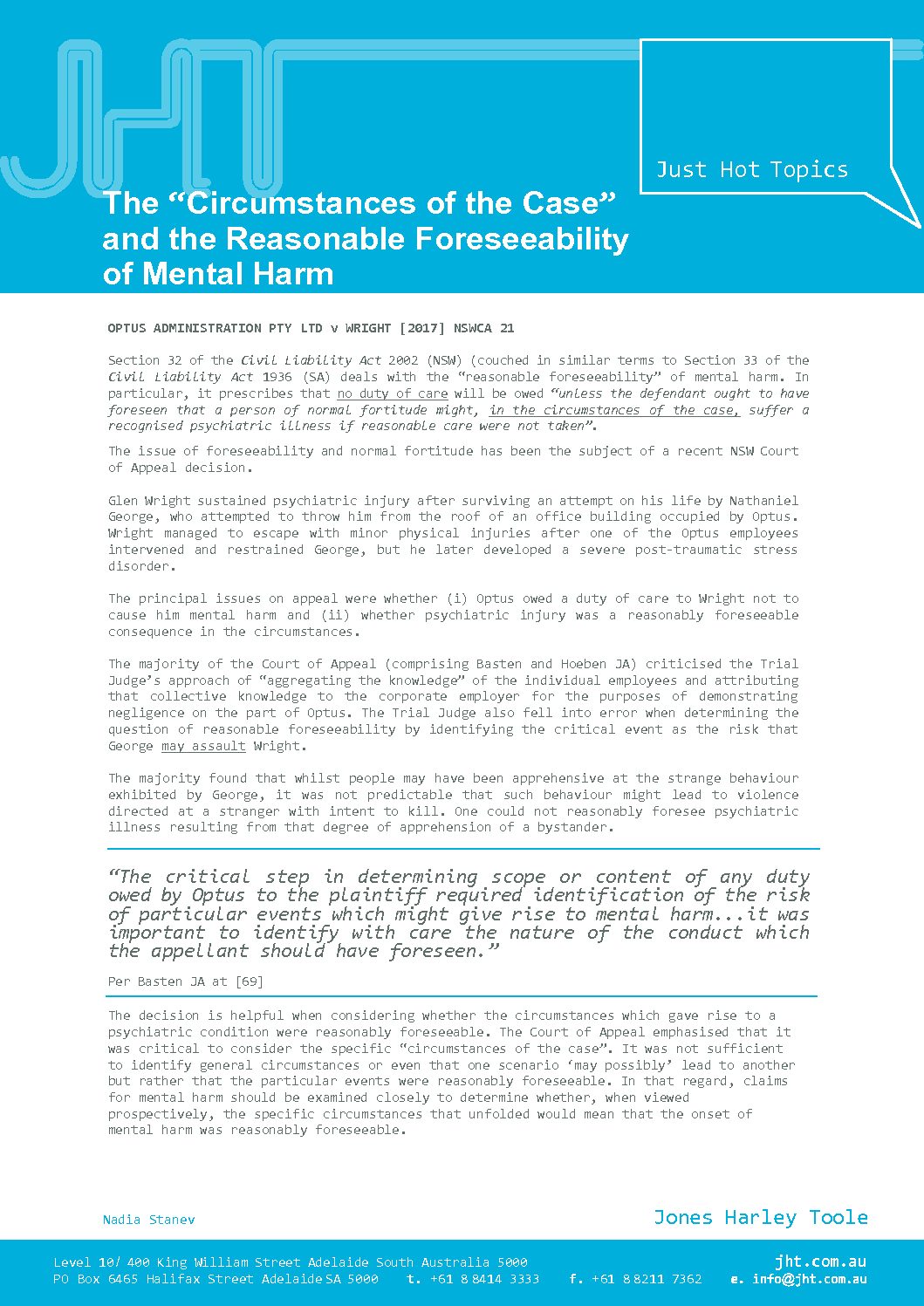 Section 32 of the Civil Liability Act 2002 (NSW) (couched in similar terms toSection 33 of the Civil Liability Act 1936 (SA) deals with the “reasonable foreseeability” of mental harm. In particular, it prescribes that no duty of care will be owed “unless the defendant ought to have foreseen that a person of normal fortitude might, in the circumstances of the case, suffer a recognised psychiatric illness if reasonable care were not taken”.

The issue of foreseeability and normal fortitude has been the subject of a recent NSW Court of Appeal decision.

Glen Wright sustained psychiatric injury after surviving an attempt on his life by Nathaniel George, who attempted to throw him from the roof of an office building occupied by Optus. Wright managed to escape with minor physical injuries after one of the Optus employees intervened and restrained George, but he later developed a severe post-traumatic stress disorder.

The principal issues on appeal were whether (i) Optus owed a duty of care to Wright not to cause him mental harm and (ii) whether psychiatric injury was a reasonably foreseeable consequence in the circumstances.

The majority of the Court of Appeal (comprising Basten and Hoeben JA) criticised the Trial Judge’s approach of “aggregating the knowledge” of the individual employees and attributing that collective knowledge to the corporate employer for the purposes of demonstrating negligence on the part of Optus. The Trial Judge also fell into error when determining the question of reasonable foreseeability by identifying the critical event as the risk that George may assault Wright.

The majority found that whilst people may have been apprehensive at the strange behaviour exhibited by George, it was not predictable that such behaviour might lead to violence directed at a stranger with intent to kill. One could not reasonably foresee psychiatric illness resulting from that degree of apprehension of a bystander.

“The critical step in determining scope or content of any duty owed by Optus to the plaintiff required identification of the risk of particular events which might give rise to mental harm...it was important to identify with care the nature of the conduct which the appellant should have foreseen.”
Per Basten JA at [69]