THE VALUE OF CONTEMPORANEOUS EVIDENCE 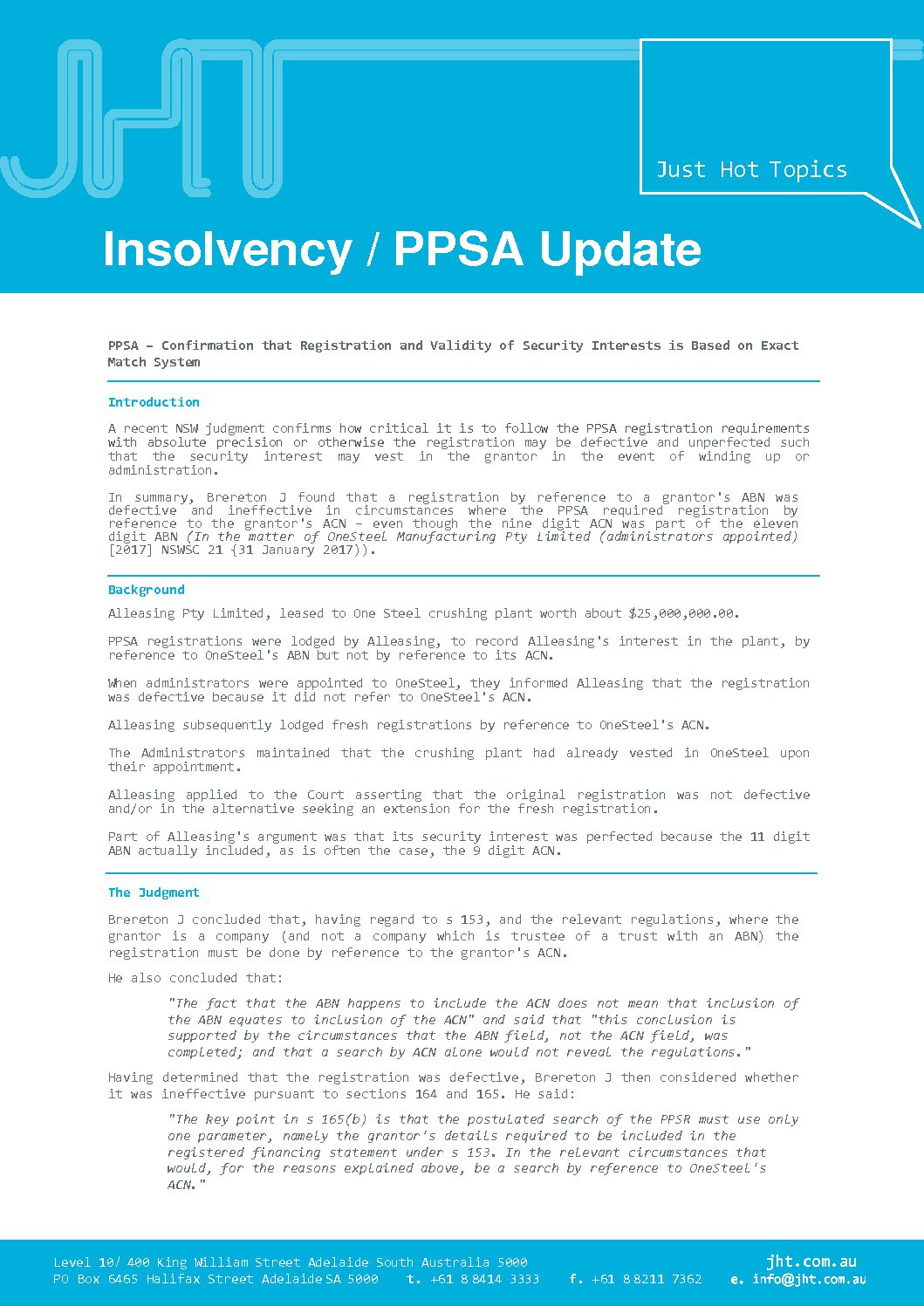 A recent NSW judgment confirms how critical it is to follow the PPSA registration requirements with absolute precision or otherwise the registration may be defective and unperfected such that the security interest may vest in the grantor in the event of winding up or administration.

In summary, Brereton J found that a registration by reference to a grantor's ABN was defective and ineffective in circumstances where the PPSA required registration by reference to the grantor's ACN – even though the nine digit ACN was part of the eleven digit ABN (In the matter of OneSteel Manufacturing Pty Limited (administrators appointed) [2017] NSWSC 21 {31 January 2017)).

When administrators were appointed to OneSteel, they informed Alleasing that the registration was defective because it did not refer to OneSteel's ACN.

The Administrators maintained that the crushing plant had already vested in OneSteel upon their appointment.

Alleasing applied to the Court asserting that the original registration was not defective and/or in the alternative seeking an extension for the fresh registration.

Part of Alleasing's argument was that its security interest was perfected because the 11 digit ABN actually included, as is often the case, the 9 digit ACN.

Brereton J concluded that, having regard to s 153, and the relevant regulations, where the grantor is a company (and not a company which is trustee of a trust with an ABN) the registration must be done by reference to the grantor's ACN.

He also concluded that:

Having determined that the registration was defective, Brereton J then considered whether it was ineffective pursuant to sections 164 and 165. He said:

"The key point in s 165(b) is that the postulated search of the PPSR must use only one parameter, namely the grantor's details required to be included in the registered financing statement under s 153. In the relevant circumstances that would, for the reasons explained above, be a search by reference to OneSteel's ACN."

Alleasing argued, however, that there were "combined grantor searches" which would, in essence, find a corresponding ABN on the PPSR even if only the ACN was entered in the search.

Brereton J explained that "combined grantor searches" could only be undertaken "using not the PPS Register portal but a third-party "business-to-government" (B2G) platform linked to the PPS Register….."

In this regard, he found that:

In dismissing the "combined grantor searches" argument, he then went on to say:

"Entering a search parameter on a B2G platform is not itself a search of the PPSR; it generates the functionality of the B2G platform, which then transmits messages to the PPSR. A "combined grantor search", by the time it reaches and searches the PPSR, is in fact multiple searches, the ABN and name having been obtained from other external sources. Each of those searches – against ACN, ABN and name – generates a separate search result, with a separate unique search identifier. Thus such, a "combined grantor search" is not one by reference only to the ACN. Even though the client may enter only the ACN into the third-party search platform, the ensuing search of the PPS register is not a search of the register by reference only to the ACN."

"Thus the defect was seriously misleading, because the omission of the ACN meant that searchers using one of the authorised modes of search would not discover the registration. Accordingly, the original registrations were ineffective pursuant to s 164(1)(a)."

While there were other issues, including a Constitutional argument, Alleasing was unsuccessful and as a result, upon the appointment of Administrators, the $25m asset vested in OneSteel.

Alleasing lost its security simply because an employee did not appreciate that the Act, in the circumstances, required registration by reference to the ACN and only the ACN.